Where should I start...hmm...let's start with the ending - does this seem ok? Let's see...

At the beginning there was darkness lots of darkness until Livolo light switches appeared and suddenly things  started to change and shed some light. Ok enough storytelling ...

A friend of mine asked me if I could "automate" his home lights so that he could switch the lights on and off at its will and in each room independently. I replied - why not? I like to automate stuff more than anything so this was an opportunity  for me to put some things into practice. More than that I thought - pff, light bulbs ON, OFF, ON... that should be a piece of cake, right?  Well...the reality turned to be a little bit different.

Let's take each of the above and discuss in detail:

1. Infrastructure:
Here in the EU we have classic mechanical switches and a simple wiring in the walls as we don't need more than that. So starting from the main panel where all the "electricity" is distributed in the house we have this (a simple schematic and just a small part of it denoting a light switch circuit only): 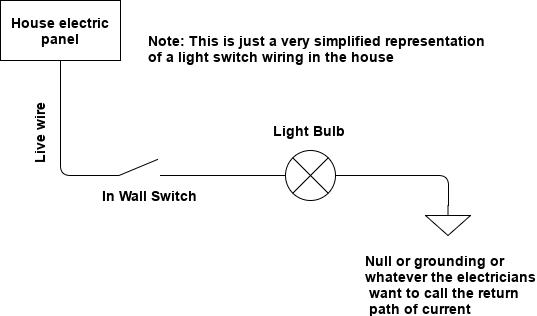 So how can one replace the above mechanical switch with an electronic one (with touch sensors, radio, bla, bla ...) and keep the existing wiring/infrastructure? Well some of you might say it's impossible - how to power up an electronic device using only the live wire and close the circuit via the light bulb back to neutral.
A team of smart guys from China (but not the only ones around here) created an electronic light switch named Livolo which can just do that - act like a replacement of a mechanical switch and that remains powered in both states (no matter if the light is OFF or ON).

How does it work?

After some while of searching and doing research I found out that the magic works based on some preconditions:
So to summarize the above there are two different conditions in which the internal power supplies from the electronic switch must work:
First condition is achieved via an internal switching power supply called a ringing choke converter or self oscillating flyback converter - this is so popular due to the reduced component count which is a must in this case (well the efficiency is not so great but it's enough for this project to work). Oh and please watch out - this kind of power supplies (as all dc-dc or ac-dc converters which work in "switching" mode) are noisy in general so extra care should be taken to not mess up other circuits around ...

Now the second power supply that works when the switch is in the ON state - well this one is still a bit of mystery to me but the general approach that I see here is to have some kind of an element wired in series with the relay contacts which drops some voltage over it (so basically it steals some voltage from the light bulb but not too much so that it doesn't malfunction). Next we can pick that voltage and feed it via a dc-dc converter or a voltage stabilizer circuit in order to have a predictable DC voltage output.

Luckily for us the Chinese engineers took care for us about all the intricate details of this special supply and provided a 3V output which we can use to power up our custom BLE enabled board.

Why BLE? The main reason is that we need a board which draws very little current - as low as a few milliamps and even lower if possible. This is because of the switch powering limitations that I talked above. If we can achieve this state then we're on the safe side and the switch will work stable for a long period of time and without surprises.

Let's talk about the Livolo switch construction details a little bit. It has two boards inside it:

What we can do about it? Well we replicate the front board with touch sensing a custom radio solution - BLE in our case and make it work and behave according to our needs. This is all this project is about after all right?

Now we have so many options out there in choosing a radio solution and a MCU (microcontroller) but not all of them are good for our project here. Why? Because:
What I tried and experimented so far:
In the next post I will start to explain and provide step/pictures of the custom boards and the rest of the parts needed for this project to work. So stay tuned ...
Posted by mtiutiu at 1:10 AM No comments:

The story of a home automation system

This is a series of posts regarding my progress and "story" of a home automation system - pitfalls, what I learned, what I created as seen in the next to come pages.
Posted by mtiutiu at 4:26 AM No comments: